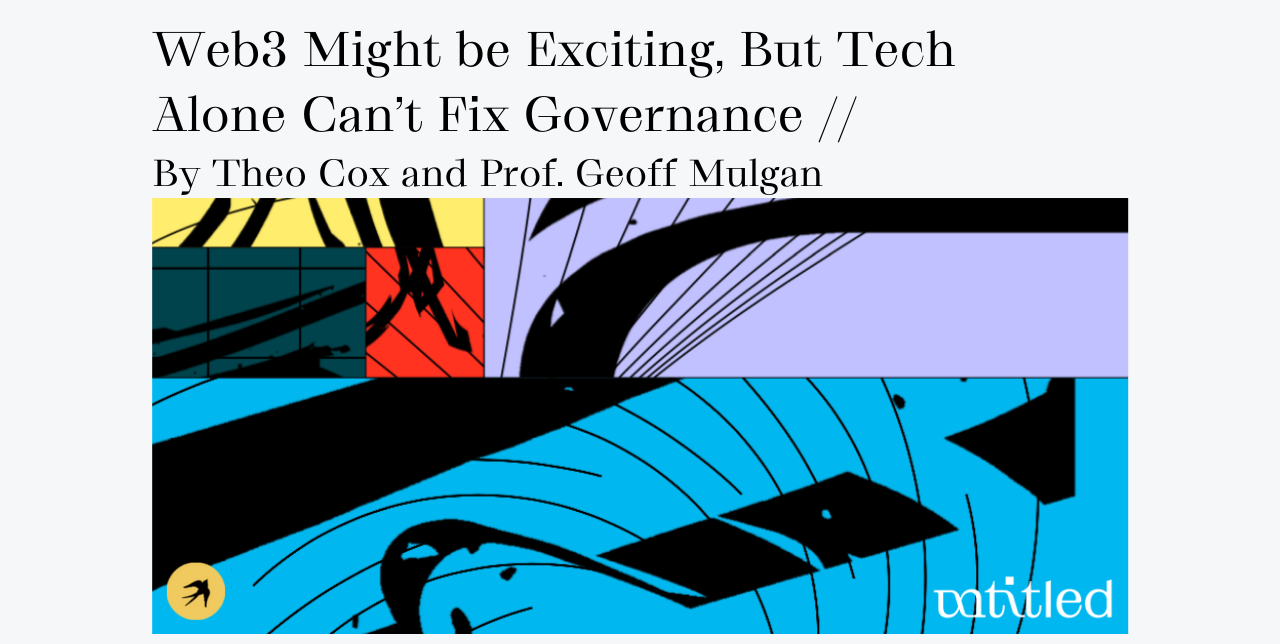 Technology can help transform governance. But, the example of Web 2.0 shows that this is far from certain: technologies that appear to be good for democracy can easily turn out to be anything but. Now that the rise of Web3 has sparked another burst of experimentation in new approaches to governance it’s vital that serious thought – and experimentation – helps us get the best from new technologies.

Governance is an oddity. It matters hugely for everything, from peace and prosperity to wellbeing. But it often evolves at a glacial rate, being slower to adopt new technologies than almost any other field.  As a result, many modern governance systems look inadequate and archaic – frustratingly hierarchical, inflexible, and unable to harness the collective intelligence of their societies.

Many see new, radically alternative governance models as an answer. Web3 has brought a Cambrian explosion of new, blockchain-based collaborative projects, promising novel approaches to decision-making and accountability. New organisational forms like DAOs (Decentralised Autonomous Organisations) have begun to emerge, some trialling atypical decision-making mechanisms like quadratic voting. They promise decentralisation, democracy and equality, often unshackled from what they see as stifling state and corporate bureaucracies.

In response, the sceptics point out, that although there are thousands of DAOs, they have had little impact in the real world (other than fuelling a rollercoaster of asset prices).  But history suggests that after the hype dies down, lasting changes do happen, even if they are not the ones expected by the evangelists. The dot-com bubble bursting didn’t stop the Internet from transforming many areas of life. Yet Web 2.0 provides a cautionary tale: after the dust settled it had been subsumed by the existing order, if anything strengthening some of capitalism’s worst elements (e.g. monopoly, autocratic corporations, manipulation of consumers). Meanwhile, our ability to cooperatively solve our major challenges remained low.

Ensuring currently fringe innovations realise their potential – and confirming it exists at all – requires two things: sharper theory and extensive experimentation, to find out which governance technologies work for which purposes. We need a theoretical framework for comparing contexts in which governance models operate, and hard experimental data to test the efficacy of diverse approaches in these contexts.

Too many innovative models currently have been conceived for atypical contexts, pretending they can be general-purpose solutions while ignoring the diverse roles that organisations play. For example, quadratic voting may reduce the tyranny of an apathetic majority, but this might not be the biggest challenge everywhere. DAOs may enable more transparent decision-making, but be unsuitable for place-based organisations like housing providers.

Reality is messy and complex. Organisations must account for multiple factors, including decision stakes and reversibility, levels of expertise, ease of joining or leaving and impact distribution. All vary considerably between contexts, and good governance has to be tailored to differing needs; criteria for good forest governance may not apply to a software coop, while those for an investment fund are likely to differ from those for a local food producer.

Effective innovation requires an understanding of governance needs across contexts. Evaluations of how different governance technologies can meet these needs can be used to refine promising options for experimentation. Testing hypotheses against on-the-ground realities can then confirm what really works, and where. This needs partnership across academia, policy, civil society and communities themselves.

This didn’t happen around Web 2.0, and large-scale philanthropy only took significant interest very late, when disasters like misinformation, democratic corrosion and monopoly were hard to miss. We need to ensure that history doesn’t repeat itself. No-one benefits from the current split around Web3, pitting simplistic evangelists against hostile sceptics who implicitly believe technology can do nothing for governance. Instead, we need open-minded but rigorous experiments to discover progressive, practical options for the future. Otherwise, technologies will again crystallise in ways we’ll all have reason to regret.

Theo Cox is Head of Delivery at Life Itself Labs, a subsidiary of Alliance member Life Itself focusing on systemic innovation at the intersection of economics, governance and technology. He has a background in consultancy, specialising in participatory governance and strategy, and holds both a BA in Politics, Philosophy, and Economics from the University of Oxford and an MSc in Development Studies from the LSE.

Geoff Mulgan is a Professor of Collective Intelligence, Public Policy and Social Innovation at University College London. He also has active roles with Demos Helsinki and the New Institute in Hamburg and works with various national governments, foundations and businesses.

Recently, he has been developing ideas on shared intelligence, wisdom, science policy, social science, imagination and systems – and has been heavily involved in pandemic responses, and helped lead the International Public Policy Observatory (IPPO) focused on COVID-19.